いっらしゃいませ!  Thanks for wanting to find out a little bit more about who we are, and how our business came to be.  We have a bit of an interesting story to tell, so if you have some time, pull up a chair, stay awhile, and listen (well, in this case, read). 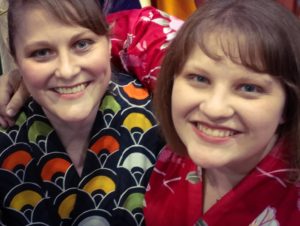 My name is Cheri, and my sister Teri and I co-founded this business because of our love of and desire to share Japanese culture with the world.  With the help of our family and friends, we travel the United States with all kinds of vintage wafuku (Japanese clothing), like kimono and obi.  During our travels, we teach people how to wear kimono in traditional and modern ways, tell them about kimono trends we see in Japan, and make it possible for ordinary people to buy some of the most beautiful clothing in the world.  We go back to Japan up to three times per year; import thousands of kimono, obi, haori kimono jackets, and more straight from Japan; and we’ve figured out how to do it in some of the most effective ways possible because we strongly believe kimono should be for everyone.  Almost every piece in our collection is unique to this country; some are newer, but some are over 150 years old.  It’s a lot of work, and getting to this point has been quite a journey! 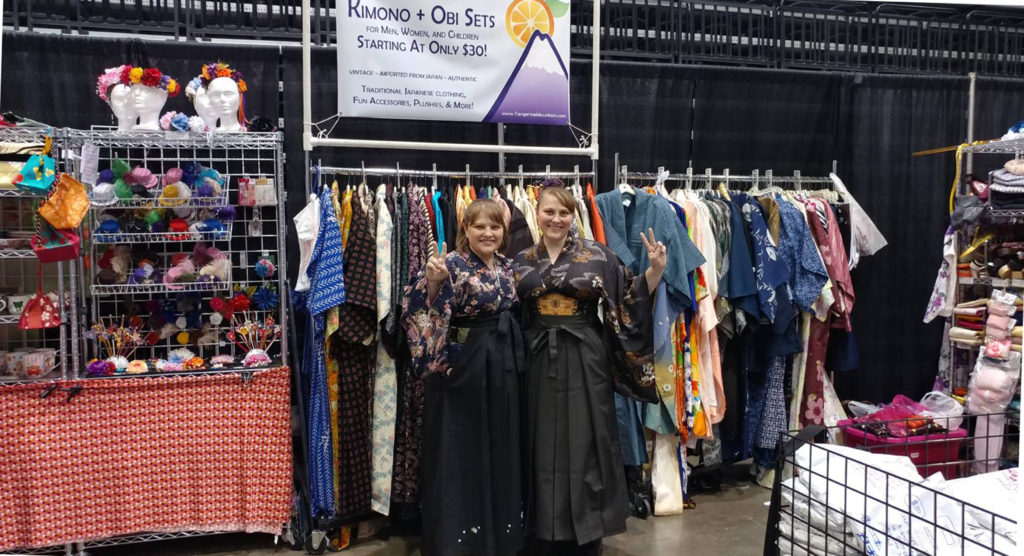 Even though we are not Japanese, Teri and I were lucky enough to be exposed to Japanese art and culture ever since we were little kids.  Our mom had always been interested in Asia, and even had a statue of a lady in a kimono that Teri kept trying to touch when she was a toddler.  Our dad was invited to Japan in the late eighties as part of an attorney delegation to Asia to improve international cooperation in enforcing copyright, trademark, and trade secret laws among North American and Asian companies.  While he was there, he was fascinated by what he experienced, and wanted to bring back some souvenirs that he could share with our family.  He brought back kimono, netsuke, figurines and art….so much that he made room in his suitcases by mailing his own clothes home (and leaving some behind)!  The things he brought back and the stories he told enchanted us; so from a very early age, we were “bit by the bug” and started to learn everything we could about this awesome place called Japan.

As teenagers, we became more and more interested in Japanese culture, history, and fashion.  We read every book we could get our hands on that related to Japan, and thanks to dad’s work, we had a crazy contraption called a “Personal Computer” brought into our home.  When we gained access to the early world wide web, we were able to start finding information about Japan more quickly, and in the process, realized that some of the “cartoons” we loved to watch were, in fact, translated Japanese anime.  At the time, certain types of information were pretty hard to find even online, and goods from Japan were either difficult to come by or were often prohibitively expensive when found.  Thankfully, as kids we had a strong sense of perseverance because we were raised to be stubborn and tough. 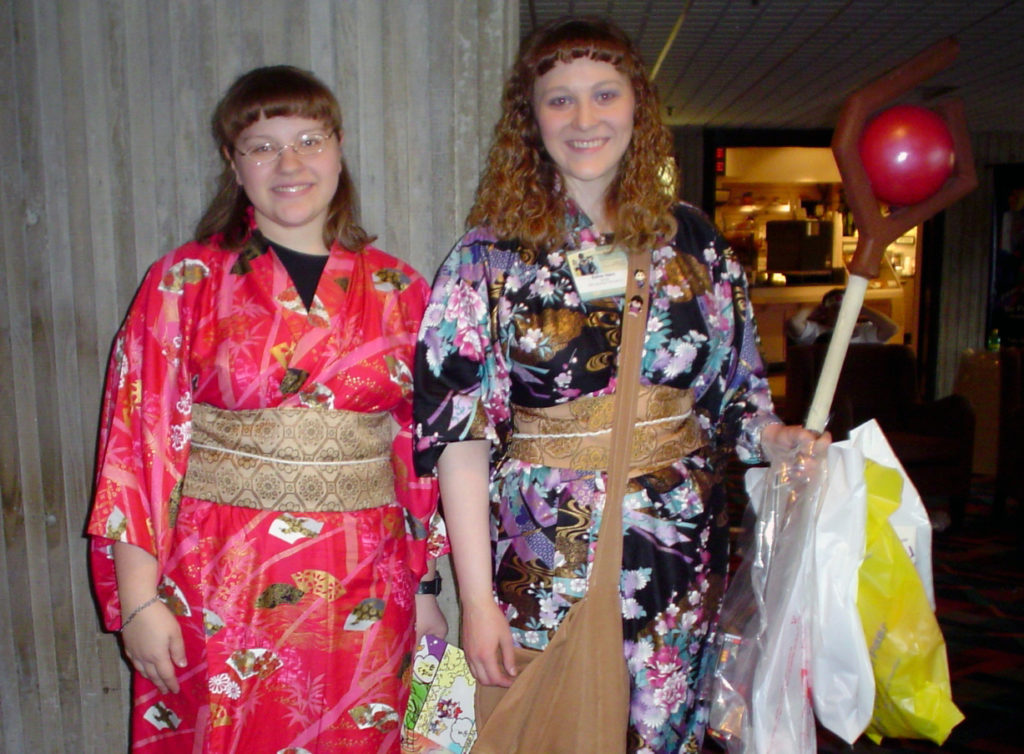 You see, we both have severe food allergies and a few disabilities; so as kids, we faced many life-threatening situations — from anaphylaxis to asthma attacks that snowballed into hospital stays.  (In fact, Teri nearly died during birth; and according to mom’s doctors at the time, I was the baby that never should have survived to birth, let alone after.)  While we both have the same stubbornness, we came about our particular brand of perseverance in different, yet somewhat similar ways:

When Teri was 8 years old, she developed an extremely painful condition called Reflex Sympathetic Dystrophy (RSD).  It took a while to get it properly diagnosed, and when she did, her specialists told her she would never walk again.  She promptly told them that they were wrong, (I told you we were stubborn), and started doing everything she could to walk again.  After seeing her stubbornness turn to progress, one doctor thankfully changed his mind, regained hope, and put her through a physical therapy program.  That helped build her leg up out of atrophy, and after more than a year, her leg was healthy, strong, and mostly pain-free.  Teri still struggles with auto-immune disease today, but is determined to not let it slow her down.

Years later, when I was 16 years old, a doctor made a terrible mistake and prescribed medication that was never supposed to be given to a teenage patient.  My tendons, cartilage, and nerves were profoundly affected, and as a result, I had to use a wheelchair to get around for the next 7 years of my life.  I had dreamt of becoming an animator at Disney, and wanted to eventually draw for Studio Ghibli;  but I had to shelve those hopes because of how badly my legs, arms and hands were injured.

Despite all of this, I was accepted to Northwestern University and majored in Performance Studies.  While there, I channeled my frustration over my health into advocating for equal access for students and faculty with disabilities.  I studied Japanese language, Buddhism, and Japanese arts during my studies at NU, and as my health started to improve, and I decided to add on a second major — Art Theory and Practice —  to my degree.  This addition to my curriculum led me to the opportunity to study sumi-e under a Living National Treasure of Japan, Shozo Sato.  Sato-sensei has dedicated his life to engaging in cultural exchange between Japan and the United States, and he was the first person from Japan to encourage me to keep studying Japanese art.  He was also the first person to teach me about the process and the art of wearing kimono.  I am happy to report that after all of my studies, and despite my health problems, I graduated from Northwestern University with distinctions, and was able to walk across the stage to receive my diploma.

Eventually, after a lot of physical therapy and some sheer force of will, I was able to leave the wheelchair behind for good.  I also started churning out painting after painting with subject matter directly influenced by Japanese and other world cultures.  Soon  after, I was accepted as a graduate student at the School of the Art Institute of Chicago, where I earned my Master of Arts in Art Education.  During my time at SAIC, I continued to give my art and heart to Japan, and devoted my thesis research to unpacking and redefining “Japonisme” in such a way that gave Japanese artists (such as Sotatsu Tawaraya) the proper credit they deserved for Japanese “folding fan composition” that many French Impressionists utilized to organize some of their most iconic works.  I was lucky enough to take my research on the road, and with the help of SAIC, I flew to Japan to complete my thesis research.

Thanks to one of my professors, I was invited to present my thesis-in-progress to fellow students and professors at Tokyo University. (Which was, by the way, one of the most stressful days of my life!) During part of the trip, I took a bit of a detour and visited Mount Kōya (Kōya-san) at the suggestion of one of my professors.  While on the mountain, my professor bought some tangerines from a fruit seller for us to enjoy as we explored the mountain.  After a long hike, I sat down near a Jizo statue in Okunoin Cemetery to rest and eat my tangerines. 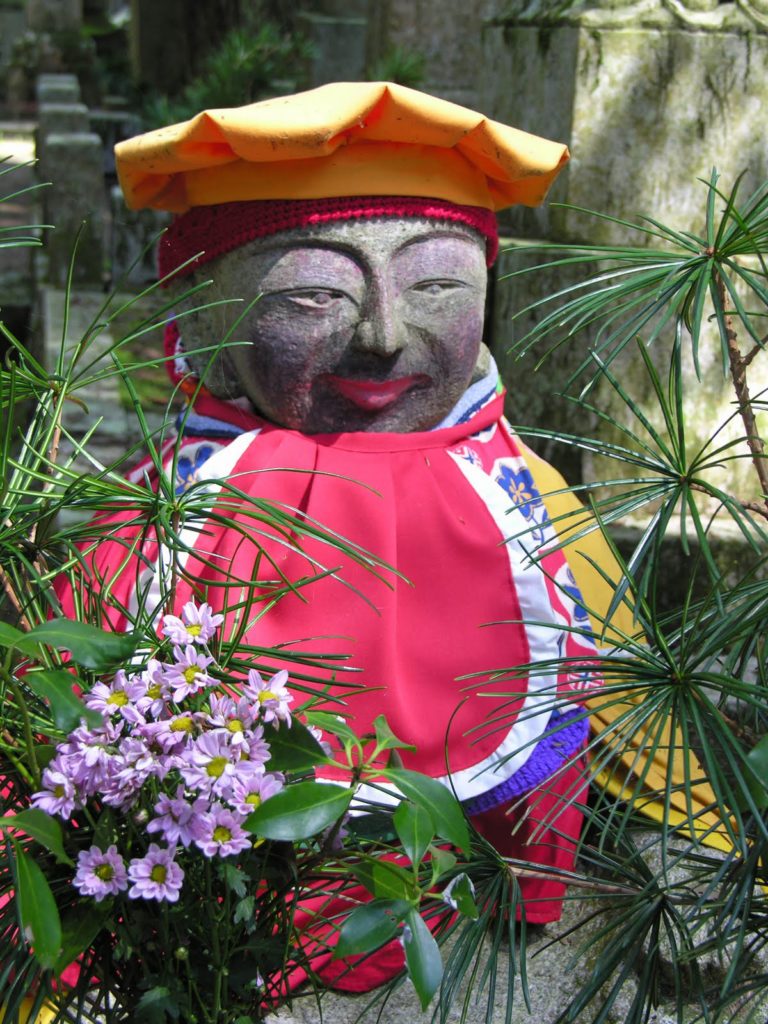 I kept thinking about how much I wished I could bring my fantastic experiences in Japan home with me; and in that moment, the idea for a Japanese import company was born.  I started Skype messaging Teri, and after contending with some very spotty WiFi, we decided that no matter how difficult it was, we were going to “go for it,” and figure out how to import the Japanese things that we loved to the United States.  We knew that there had to be others like us in the USA that researched, respected, and wanted to experience Japanese culture; so we decided that we wanted our new business to serve as an entry point to experiencing certain aspects of Japanese culture.  Before I could do anything though, I had to finish my thesis and graduate from SAIC; which I did, with distinctions. 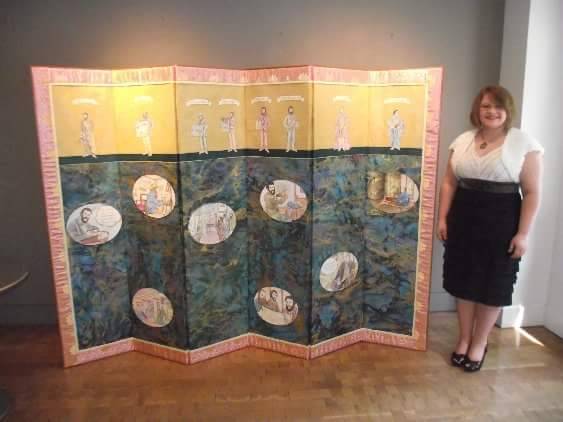 Along the way, I received a grant from Nippon Sharyo for one of my paintings, and shortly thereafter, some of my paintings were acquired for permanent exhibition in three countries.  My paintings also started to be collected by private buyers, including a (now retired) Ambassador of Japan.  When the Tohoku Earthquake rocked Japan in 2011, I organized an art auction benefit to raise money for relief efforts.  Later, I became the first non-Japanese recipient of the Japan America Society’s Mary Koga award, in recognition of my efforts to engage in cultural exchange between the United States and Japan.  All of these experiences were truly amazing; but all the while, that moment on Kōya-san stuck with me and Teri.  We kept trying to figure out the best ways to bring Japanese kimono and other goods to the United States, but still had a lot more research and planning to do.  We figured we’d accomplished some pretty hard things in the past, so we owed it to ourselves to try.

And oh my gosh, how we’ve tried!

After the years of research and making the connections necessary to accomplish our goals; and thanks to help from our parents, husbands, and friends along the way; we figured out how to get wafuku and other Japanese goods imported to the United States efficiently and in a cost-effective way.  We decided to start selling our wares at anime conventions, since we knew that the people (like us) that attend those kinds of events have an inherent love and respect for Japan.  And when we were trying to decide what to call ourselves, Teri thought that it would be fitting to name our company “Tangerine Mountain,” in honor of that moment of eating tangerines on Mount Kōya when we decided to, “go for it.” 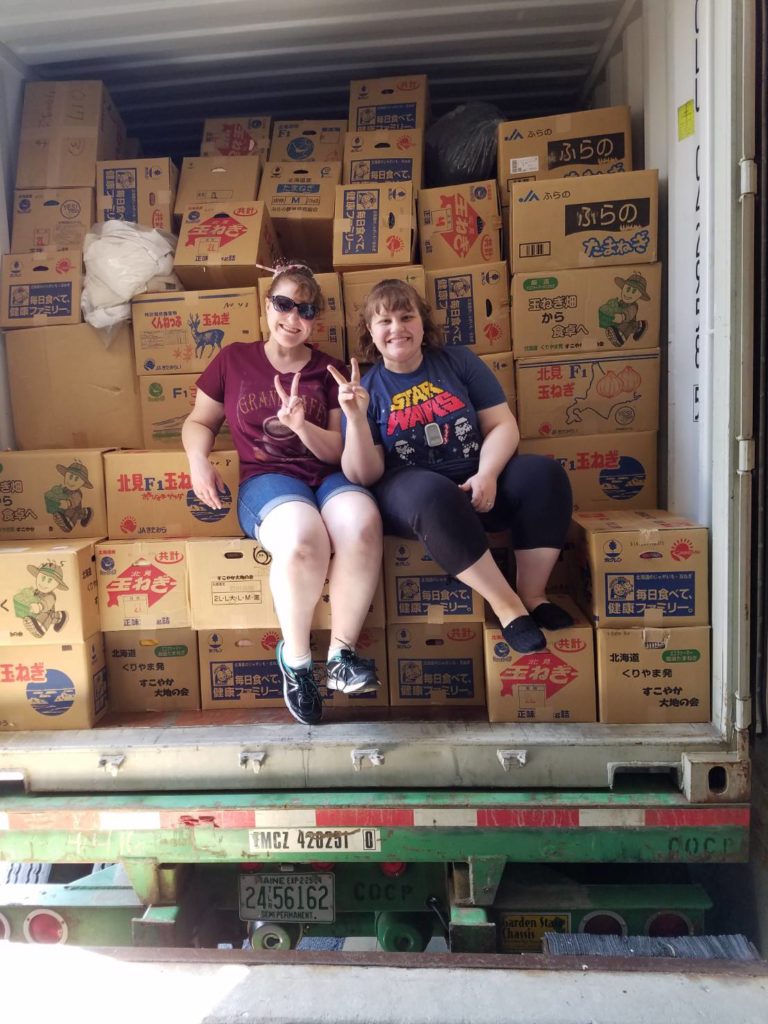 There are so many other details and stories that I could add onto this (already long) narrative; but for now, in a nutshell, this is the story of how we started our business!  It’s been an adventure, with some interesting twists along the way.  But, as you can see, at every turn Japan has remained a focal point in our lives.  After only three/four years doing shows, each year we are able to import more and more wafuku (now by the thousands!) directly from Japan to the United States, and we are growing like crazy!  We’ve done exciting things like expanding our show calendar from three conventions / events to almost thirty, and we’ve also recently opened our first west coast branch, and we are proud to say that we are the only kimono business in the USA that has been featured on Japanese Prime Time Television!

We feel very excited and honored that we have the support from all of our friends and contacts in the United States and Japan to successfully bring affordable, authentic kimono to the American public; and we hope that our continuing journey will inspire you to start your own to learn more about this fascinating country and culture.  Please be on the lookout for our exciting announcements as we march forward! 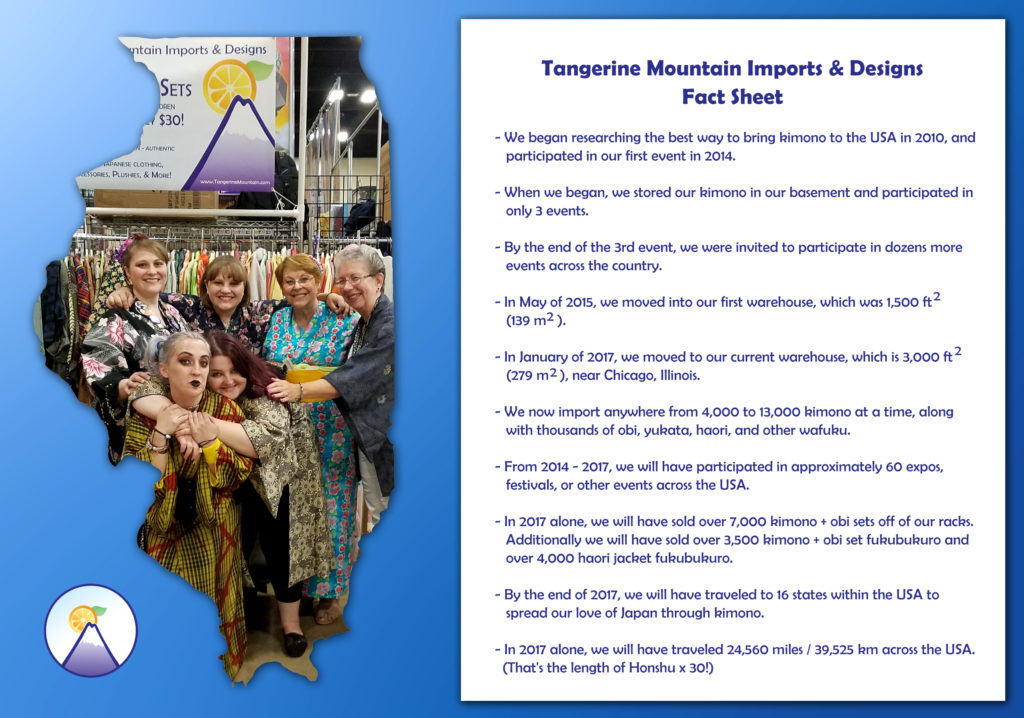 Subscribe to the Tangerine Mountain Newsletter for email about kimono, Japanese culture, and our upcoming convention schedule. We will not share your email with anyone ever.

Hey everyone! Get ready for some awesomeness this

Hey #WafukuWarriors! Today, we invite you to check